In last months a new solo has been developed and built in the PDC workshop. The Solo is a one design class , designed in 1956 by Jack Holt. 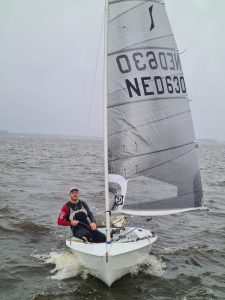 In last months a new solo has been developed and built in the PDC workshop. The Solo is a one design class , designed in 1956 by Jack Holt. It is a 1-person racing boat that is especially popular in United Kingdom and the Netherlands. In United Kingdom about 100 new Solos are added every year. The class is also growing in the Netherlands at the moment. Most Solos are still made of wood, but nowadays the new Solos are usually made of foam with epoxy. Paul couldn’t resist building a solo for himself.

The project started as a school project for our employee Thomas. Thomas is a Marine Engineering student in Leeuwarden, he works in our warehouse in his free time. As an internship assignment, he went through the rules and drew the ideal Solo hull shape from this. He also made calculations for the ideal weight distribution in the boat. After this, the project passed to Lance, who took over and drew the rest of the Solo and the final mould. All this happened under the eyes of Paul, who of course implemented his own ideas everywhere.

The lamination work could not be handed over, so Paul has  done this by himself. The result is a completely in-house developed Solo 673. Last year Paul was Dutch Champion in the Solo class. This weekend the Dutch Championship will be held on his home water, the Sneekermeer. We wish Paul the best of luck and hope he comes home with the pennant. 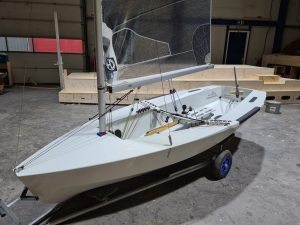