Last weekend there was the Open Dutch Championship Solo  on the Sneekermeer. 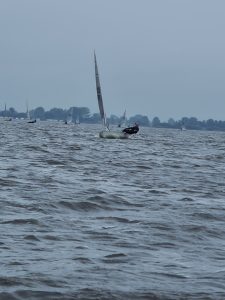 Last weekend there was the Open Dutch Championship Solo  on the Sneekermeer. For Paul this was the first race for the self-built Solo 673. After the first day it was a bit of a struggle, after a jostling at the start and a worse race, the results were not what he hoped for (20, 1 and 24). On the second day the results were much better and with a 1, 3, 3 ,1 and the deduction of the two worst races, the chances were still open after day 2. Pim van Vught was in the lead, followed by Menno Huisman and Jelmer Kuipers.

The tension was great when Paul started on the final day with a 1, after all with 3 1st results he could still win the Championship. Pim van Vught, the first at the time, a member of the Dutch Sailing Team and just back from Tokyo, sought out Paul before the start. Paul couldn’t win this battle. With a 1st place for Pim and a 4th place for Paul, Pim van Vught was certain of the championship. Paul finished the series with a 1st place and with 5 races won happy with the second place. Menno Huisman, known from the Valk class, finished third.

The construction of solo 673 has not gone unnoticed, the Leeuwarder Courant is also paying attention on the boat today. 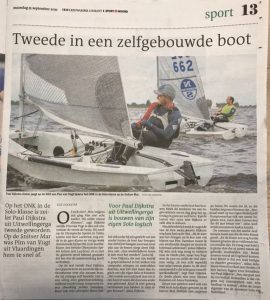